You are here: Home / Xbox / I Keep Coming Back to No Man’s Sky 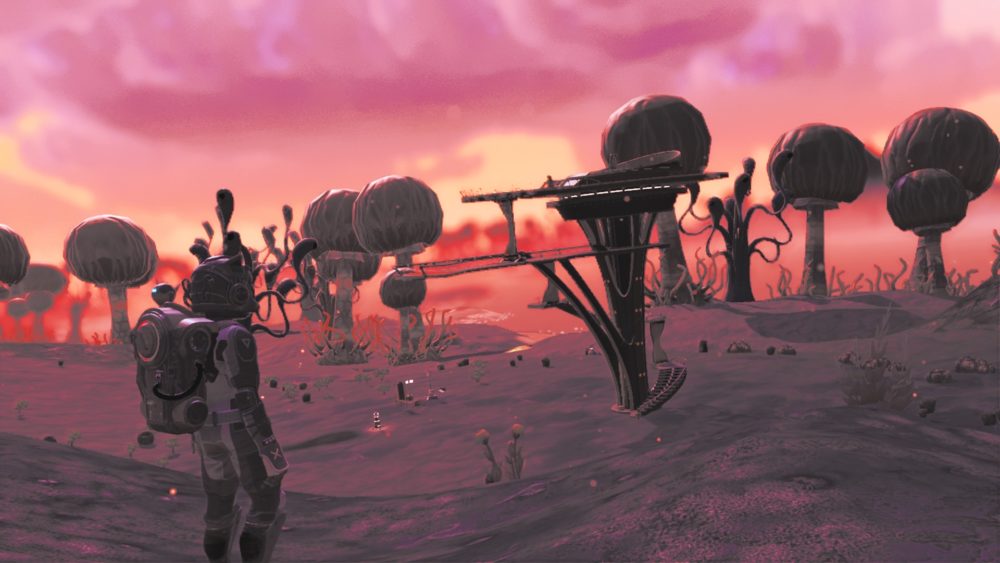 Despite its shaky launch and ongoing issues, No Man’s Sky still has its hooks in me. Having finished the story a while ago, I am now enjoying the end game of No Man’s Sky.

End game activities for me include building futuristic and sciency intergalactic bases, upgrading my starship fleet, mining Activated Indium and exploring the galaxy for that perfect forever home. No Man’s Sky is a super chill gaming experience that definitely scratches a nerdy itch for me. Here are a few of my favorite end game activities.

The base building aspect of No Man’s Sky has a lot of room for improvement. Building materials are quite limited and it can be a little glitchy, especially underwater. Regardless, it’s stable enough to be one of the end game activities I really enjoy. The building menu isn’t as robust as I would like it to be, but it has just enough to allow me to get close to the vision I had in mind. I like to envision a structure suited for wealthy interstellar travelers who need a comfortable place to rest between warps. Think Tony Stark man cave meets a Four Seasons hotel. Something like that.

Depending on how ambitious you are, players can construct just about anything from floating sky base to an elaborate art isntallations with sound, lighting, and music. The only limitation placed on your designs is the selection of base building materials and your imagination. Check out this bases of No Man’s Sky subreddit and you will see what I mean.

Starships in No Man’s Sky can be found, traded, purchased and now, upgraded, thanks to the Synthesis update. You can have up to six starships in your inventory. I am currently at the limit with six that I am very fond of. Only a couple are maxed out and part of the end game for me is to become filthy rich and pump tons of upgrades into my remaining fleet.

After learning that Activated Indium is where the money is, I started strip-mining the heck out of every habitable blue star system I could find. The ideal location has S class power and S class Activated Indium. Seeing how that is nearly impossible to find, I typically settle for any B class or better mining location and just level the place.

My mining blueprint includes an ugly tower of Cuboid rooms filled with Solar Panels and Batteries. I set down about 30 or so Extractors and as many storage containers as I deem necessary to make me filthy rich. My Activated Indium mines are never pretty, but they do earn me 40-60M Units every time I visit. Now that’s a good value!

No Man’s Sky is about exploration. It never ceases to amaze me that there are literally billions of procedurally generated planets to visit. Billions. Creator, Sean Murry from Hello Games once said: “If a new planet in ‘No Man’s Sky’ was discovered every second, it would take 584 billion years for them all to be discovered,” Gamepedia has some facts that may just melt your mind.

After finishing the story I felt free to begin my search for the perfect world. Even though I may never find the exact combination I’m looking for (purple grass, blue water, lmk), exploration is still very exciting. Warping into a brand new star system and scanning planets is part of why I keep coming back to No Man’s Sky. Although many graphical elements repeat in the procedurally generated universe, they are never exactly the same.

Hello Games continues to release updates for the game which is admirable considering they had a very rocky start when it released in August, 2016. I’ve been impressed with the team’s dedication and look forward to future updates. I have a HUGE wishlist, but perhaps I’ll save that for another day. Cheers and as always, your comments are welcome!