You are here: Home / Xbox / No Man’s Sky – The Mechs Have Landed 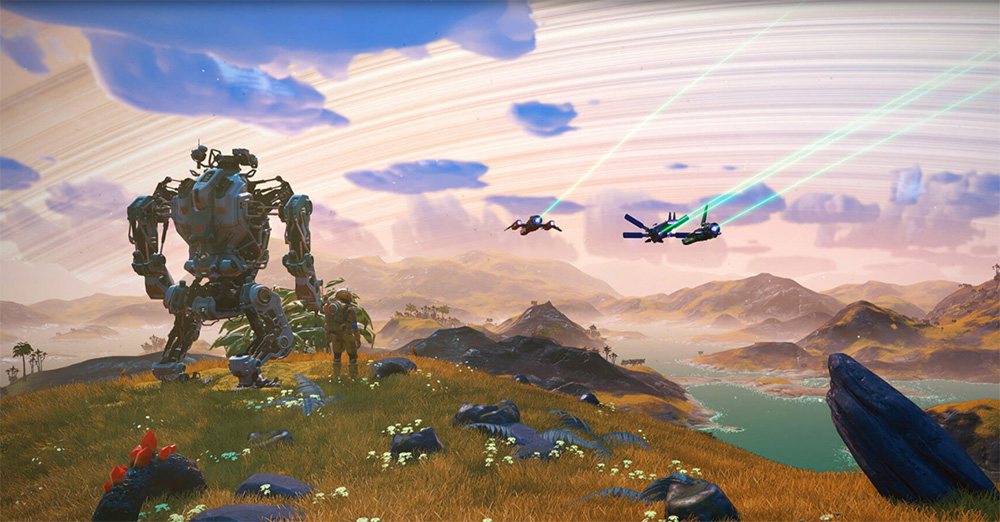 While I haven’t logged many hours in No Man’s Sky over the past couple of months, this new update has me excited again.

No Man’s Sky update 2.4 added Exo Mechs to the already impressive line up of Exo crafts available in the game. This update also added some welcome features and improvements to the game (hello, hide wiring!). It’s humbling to think about the level of effort Sean Murry and the No Man’s Sky team have invested in this space exploration and survival gem.

Since the begging and despite a rocky start in August of 2016, No Man’s Sky has continually evolved and improved. I have no idea how Sean is paying his employees because all of these updates have been completely free.

There are no microtransactions in No Man’s Sky either, which is a breath of fresh air considering how many game studios are using the freemium model.

Listen, whatever he’s doing, he needs to keep doing it.

The Exo Mech or Minotaur as it’s called, allows you to explore planets in a way we never have. Climb up into the cockpit and switch to first-person view for complete immersion. I have not played No Man’s Sky in VR but I’m dying to see what this is like.

You will need some Salvage Data to purchase The Exo Mech Geobay blueprint. While you’re at it, you should also pick up the Freighter module that allows you to summon your Exo crafts planetside as long as your Capital Ship is in the system. Summon the Nexus and check your blueprint vendors for all the goodies.

Overall I think some improvements could be made to the controls. It almost feels too much like I’m driving a mech if you know what I mean. Once you get the hang of it, you can get around pretty easily. Jumping all over the place is thrilling. Just watch out for deep ravines as you will likely have to exit and escape on foot. The Mech can even go underwater!

The Minotaur has some upgrades that allow you to mine, manipulate terrain and blast your foes. Actually, it’s quite effective against sentinels. It comes with a jetpack that allows you to cover a lot of terrain, fast.

The Mech and other features included in update 2.4 are impressive. I have been enjoying some end game activities in No Man’s Sky and look forward to incorporating the Mech into my plans to conquer the universe.

I can’t wait to see what Hello Games has in store for us over the summer. As always, thanks for reading. Game on!

No Man’s Sky is available on Xbox One, PS4, and PC.