You are here: Home / First Impressions / Serial Cleaner: So This is What It’s Like Cleaning up After the Mob 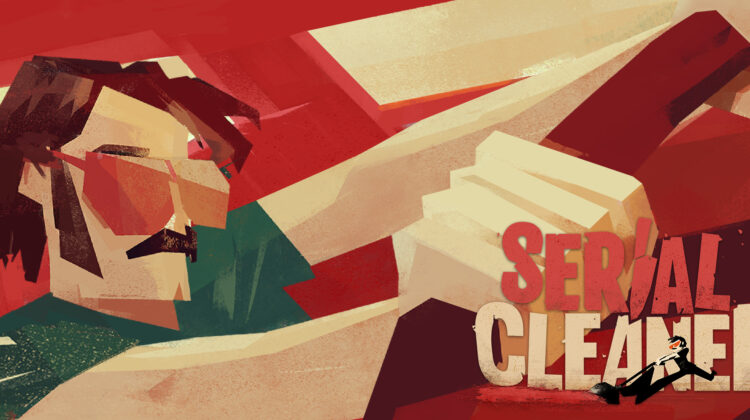 Literally unlike any other game I have played, Serial Cleaner is about a professional crime scene cleaner in the mid-’70s.

Who thinks of this kind of stuff?

Serial Cleaner was developed by Draw Distance and published by Curve Digital and e2w and features a narrative-driven, fast-paced stealth/action story with a 1970s vibe and aesthetic. The music is also fantastic. You will often find your self bobbing slowly to the 70’s jazz beats while sucking up gore with your trusty Electrolux Automatic 345.

You play as Bob Leaner, who takes on contracts to clean up grizzly murders by disposing of bodies, vacuuming bloodstains, and removing incriminating evidence from the scene, which by the way begin to fill the shelves of Bob’s bedroom. Overall, Bob seems pretty well adjusted despite his career choice. I mean, he even lives with his mother. Wholesome, right?

It would seem, however, Bob has racked up quite the gambling debt which is motivating him to take more cleaning contracts from a client he’s never met.

When they are not baking cookies or watching boxing on telly, Bob receives frequent phone calls from a mysterious client asking him to take on cleaning contracts. Later on in the game, Bob begins to become suspicious of the client, but in the beginning, he’s desperate for money, so bring on the gore!

The art style is wonderfully cartoonish, but not in a bad way. It’s reminiscent of Guacamelee with a flat, paper cut-out aesthetic. You play the game from a flat, 3/4 perspective if that makes sense. As mentioned, the characters have simple animations, like they were cut out of craft paper. I dig it. The style is not innovative by any stretch of the imagination, but it totally works with the overall concept.

Crime scenes consist of small but increasingly complex maps. From campsites and gas stations to disco clubs and office buildings, Bob’s cleaning tasks are quite varied. There are 20 standard maps and 10 Bonus contracts. The Bonus content lovingly recreates famous movie scenes from such classics as Enter The Dragon, Monty Python and the Holy Grail, Taxi Driver, Rocky Horror Picture Show, A Clockwork Orange, and more. This aspect of the game is something I really appreciated and added a fun twist to Bob’s cleaning contracts.

The cops and other lookouts always arrive on the scene before you which obviously makes cleaning up after a murder spree more difficult.

The good news is the cops and lookouts are dumb as rocks.

The cops have vision cones you need to avoid and scripted pathing which requires a small amount of patience to overcome. It’s fairly simple but becomes more complex as you progress through the campaign. By the end, it’s easy for your brain to freeze up trying to pre-program your route to the next bloody mess.

There were times when a cop spotted me and literally chased me a few feet behind when I popped behind some barrels to avoid detection. The chase can be very forgiving. What’s not forgiving is defeat. You may have 8-10 objectives on the map and if you die once, you start over. That can be epically frustrating at times as you’ve spent 30 minutes collecting bodies only to do it all again because you mistimed a movement.

The best way to avoid detection is to stay out of the vision cones or jump into cover located throughout the map. Hiding spots include barrels, bushes, potted plants, and closets. If you’re spotted, all you need to do is rush to the nearest hiding spot and wait 5 seconds. It’s as if they never saw you.

When you recover the bodies you need to do something with them. My favorite disposal method was the giant fish tank filled with piranha.

I must admit there were times I wanted to hop out from behind a potted plant and thwack a cop on the noggin before dumping his limp body in the river. Alas, you need to rely solely on your stealthy abilities and planning skills to clean up the crime scene.

Each map has randomized evidence. Every time you die or restart a level, the bodies and murder weapons change locations. This provides just enough variation to make the game replayable. There are also other challenges and collectibles throughout the 20 levels that unclick bonus contracts and outfits Bob can wear.

The story is fun and interesting to follow. At some point, Bob even pushes back his employer hinting at a conscience I didn’t think he had. The contract requires him to clean a crime scene consisting of three women who have been beaten to death. I do think a good effort was made to capture the 70’s vibe and build a backstory for Bob. There are radio, tv, and newspaper in Bob’s home that announces important headlines often connecting to Bob’s story.

Did I mention Bob lives with his mom?

Steam ratings are incredible and Metacritic gives it a 65% on the Xbox. The complaint is often that the game is too simple with very little variation to gameplay. It’s a valid argument, but overall it’s a well liked game and one that I can easily recommend. Leave your comments and feedback for Serial Cleaner below. I’d love to hear what you think.

Pick up your copy of Serial Cleaner on Nintendo Switch, PlayStation 4, Xbox, and PC from Humble Bundle.